Over the last two decades, Mexico has radically opened its economy to foreign trade and investment. The country has transformed itself from a characteristically closed economy to one in which manufacturing for export has become a main source of economic growth.

Recent Mexican economic predictions suggest good investment news for the country. Mexico’s low wages are a huge contributing factor impacting a positive flow of foreign investment. Foreign direct investment in Mexico has provided domestic work for Mexicans, and has led to positive social change—many cities (despite headlines to the contrary) have a declining crime rate, a declining birthrate, and a growing education rate.

A demographic revolution is breaking down the rich-poor divide, resulting from an obstinate middle class that is swiftly becoming the preponderance in Mexico. The blanket stereotype of Mexico being mainly linked with immigrants coming into the U.S. to work illegally is declining; a new domestic reality in Mexico is that of hard-working moms and dads that increasingly have the means to purchase necessities, as well as extra luxuries for the family.

It could be argued that the NAFTA is what catalyzed the significant transformation of socio-economic classes in this country. NAFTA allowed for billions of dollars in foreign investment to maintain flourishing manufacturing industries, employing locals and pumping money into the Mexican economy. Mexico’s growing middle class in the drive for progress that Mexico has been in need of. When industry first installed itself in Mexico in the mid-1960s, companies, mostly American, sent ex-patriots to manage their facilities. Today the vast number top and middle level management in foreign maquiladora companies are young, professional Mexican nationals.

Throughout 2000-2003 the U.S. was the source country for 73.4% of the imports by maquiladoras in Mexico and maquiladoras exports back to the U.S. were equal to 5.3% of U.S. industry shipments. Maquiladoras have become a fundamental part of the Mexican economy, with their share of national manufacturing employment rising from 4.1% in 1980 to 28.3% in 2002.

Mexico’s gross domestic product has grown at approximately twice the rate of that of the U.S. over the last 10 years on a titular basis. This has rendered a conspicuous increase in U.S. exports to Mexico as the country’s middle class grows and provides more opportunities for U.S. firms to widen their sales to Mexican consumers. Currently, revenues generated from U.S. consumer-related exports to Mexico are over $50 billion annually. In 2000, the share of international trade in Mexico’s GDP was 32%, up from 11% in 1980. The most dynamic exporters in Mexico are in-bond assembly plants. Maquiladoras main point of contact with the Mexican economy is through hiring labor. They purchase few inputs in Mexico and sell virtually none of their output domestically. The United States is the primary source for their inputs and the primary destination market for their sales.


While some argue that rich Americans and Mexicans are taking advantage of the cheap Mexican labor pool, there is corresponding lower cost of living in Mexico. In those Mexican states where incomes are a fraction of those in the U.S., the cost of living is also significantly less. New foreign owned factories in Mexico means more work for Mexicans otherwise unemployed or predisposed to emigrate north in search of work. More employment means less crime.

Emigration of Mexicans to the U.S. is due to a deficiency of work in Mexico, unemployment is more to blame than the low wages—in fact, low wages encourage more industries to manage in Mexico. It is important to note, however, that the U.S. economic crisis is causing many to return to Mexico.

In Mexican states where income is a fraction of the U.S., and the cost of living is also significantly less. New foreign-owned factories in Mexico means more work for Mexicans otherwise unemployed or predisposed to emigrate north in search of work. U.S. multinational corporations have created 121,000 jobs in Mexico 1999-2008 and there are currently 2,800 maquiladora plants employing over 1,191,250 people in Mexico.

Since the 1980s some firms moved from low-skilled assembly labor to more advanced operating procedures. The quantity of “technical workers” employed by maquiladoras increased extensively from the early 1980s to the 1990s. Today some maquiladoras now provide work for personnel in development and design as well as manufacturing.

77% of all maquiladoras are located in 6 Mexican Border States and about 83% of maquiladora employment was located in the there as well. From 1993-2000, maquiladora employment tripled tallying more than 900,000 jobs. Over the last decade, however, with the improvement of infrastructure in the interior of Mexico, companies have set up facilities there to access to what is generally agreed upon to be a labor force that is less subject to high rates of turnover.

Maquiladora management continues to grow toward becoming an all or nearly all-Mexican function. The proportion of U.S. employees running the business has diminished as Mexico’s administration and entrepreneurial strength has developed. Growth of Mexican management in percentages and maturity has led to improved operational success, and increased middle level and top level management for Mexican professionals.

In the early days English-language abilities sometimes superseded management or industry understanding when selection time came to fill positions with Mexicans. Recently, however, company jumping produces a concept known as “cherry-picking”. It occurs where one maquiladora invests in training Mexican management or other services of its workforce while others wait for the right time to make others attractive offers to those already trained, thus reducing investment expenditures.  "Cherry picking," however, is greatly reduced or, eliminated,  under Tetakawi's Mexico Shelter Plan.

Many progressive larger companies have invested in tuition reimbursement or support programs—with some sending managerial candidates or “high potential employees” to prestigious universities in both Mexico, as well as in other countries.

Mexico has made great strides in improving access to education and literacy rates over the past few decades. Mexican children have an increased opportunity to become educated.

In 1960 Mexico’s fertility rate was 7.3 children per woman, today it’s 2.3, only slightly above that of the U.S. Families are shrinking and education levels are growing—since 1980, the number of Mexicans receiving a university education has tripled and private for-profit universities with relatively affordable tuition is flourishing. 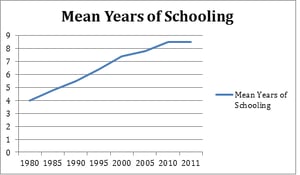 According to a 2006 World Bank report, enrollment at the primary level is nearly universal, and more children are completing primary education. The average number of years of schooling for the population of 15 year olds and over was around eight years during the 2004-2005 school year, a marked enlargement from a decade earlier when it was 6.8 years. 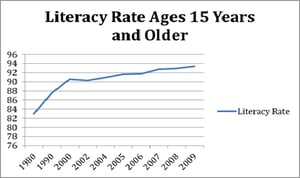 Changes in Mexico’s economic structure, demographics, and political system have transformed the country in profound ways since the 1980s. During the period of NAFTA, and beyond, manufacturing in Mexico under the maquiladora program (now IMMEX), Foreign investment in Mexico has played a positive role in expanding work and educational opportunities for Mexican citizens, keeping the country's unemployment rate in check, and bringing with it practices that have improved the safety conditions of laborers in the Mexican workplace. 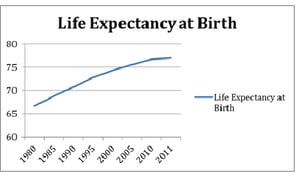 Mexican manufacturing  have successfully climbed the to the top rungs of the management ladders in the foreign companies for whom they work.  This was a status that used to be claimed, almost exclusively, by Americans. More education in addition to greater job opportunities has caused the Mexican middle class to grow exponentially for the first time in its history.  Much of this development can widely be attributed to foreign investment in Mexico.