Hiring Employees In Mexico vs The US

Manufacturing in Mexico requires U.S. businesses to employ and train a whole new workforce, and as such, companies need to utilize a specific set of hiring strategies that are distinct to Mexican employees. Not understanding the differences between hiring in Mexico compared to the U.S. can result in failing to comply with specific Mexican labor laws. Hiring the wrong workers can even result in high turnover, which increases labor costs, and not following the legal hiring procedures may lead to costly violations of Mexican labor laws.

Although Mexico is a low-cost manufacturing environment and can help U.S. businesses reduce their operational and labor expenses, offshoring to the country can go awry if manufacturers aren't knowledgeable about the country and its labor best practices. Knowing the key differences between hiring in both countries can help U.S. businesses successfully expand to Mexico.

According to a 2017 Offshore Group survey in Saltillo, Coahuila, the main source of employment awareness comes from Social Media outlets, specifically Facebook, followed by newspapers and internet employment sites, like Indeed and Monster. Other than media outlets, the main strategy used to attract employees is by public announcements, job fairs, and word of mouth. 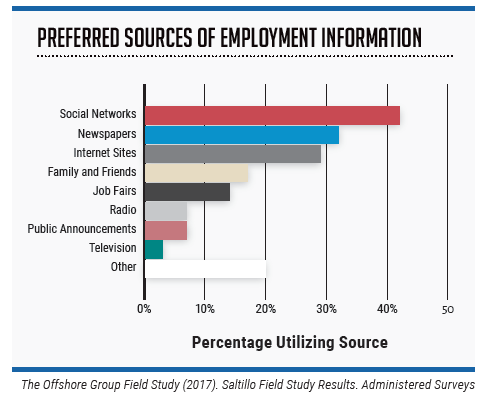 Mexican workers often look for career opportunities in their local media, which is similar to the U.S., but manufacturers need to understand the importance of creating a job opening post in Spanish. Mexico's national language is Spanish, and not everyone in Mexico is bilingual. While many Mexicans who have immigrated to the U.S. are familiar with key English terms and phrases or are completely bilingual, assuming job seekers in Mexico have the same linguistic competency can lead to hiring troubles.

Manufacturers are smart to post job opportunities in Spanish, unless the position requires English competencies. Using a software translator isn't exactly helpful — tools can scramble key sentences and result in an inaccurate translation.

Certain cultural differences with the U.S. can even affect the interview process. Conducting an interview with job seekers in Mexico can be very different than in the U.S. According to the International Business Times (IBT), certain American cultural habits or actions can be considered rude in Mexico, such as throwing a document on a table or making eye contact too often. It's also important to note that set appointments in Mexico are often seen as tentative by professionals in Mexico until they are officially confirmed.

IBT also suggested employers refrain from using the OK hand gesture. Although it may seem like an easy way to bridge the language gap, recruiters can actually offend the Mexican worker. In addition, the Mexican idea of personal space differs than in the U.S. and employees often stand close to one another. IBT also noted Mexican professionals prefer to be called by their official title during introductions.

According to Going Global, many Mexican workers rely on public transportation to get to work, but this can be difficult for employers because public transit tends to be unreliable. In the U.S., while trains and buses often run late or need maintenance, most employees are able to quickly and easily get to their jobs. While being on time for a shift in Mexico is important, Going Global suggested U.S. businesses remain flexible and accommodating in scheduling when employees take public transport. Mexicans also observe additional holidays, so it can be beneficial to schedule employees around these celebrations to avoid absenteeism.

Many manufacturing facilities and operations resort to providing transportation for their employees, especially in remote areas, and to boost retention rates. Other retention strategies include food coupons, punctuality bonus, and some form of savings. 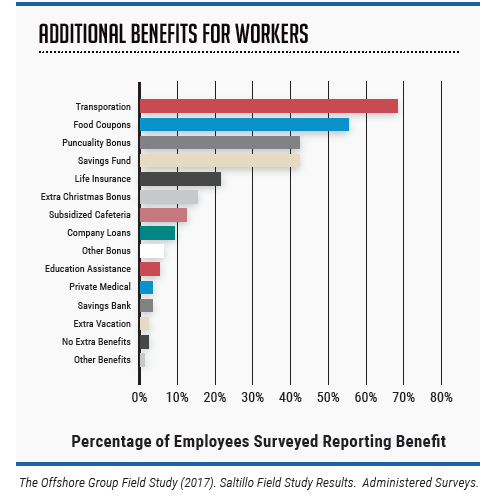 Ultimately, the best way to acquire top talent in Mexico and comply with the country's labor laws is to partner with a company that has experience in human resources administration in Mexico. Manufacturing Communities for instance understand the innate differences between hiring in Mexico vs the U.S. However, companies should still be aware of certain distinctions between the two workplaces.