With its close proximity to Southern California and its large population of skilled workers, Tijuana has become a premier location for foreign companies seeking to establish manufacturing operations in Mexico. But does that popularity come at a price?

Yes and no, finds the field study behind Tetakawi’s report on Recruiting and Compensating the Direct Labor Workforce Talent in Tijuana, Mexico. These employees know they’re in demand, so turnover for the area’s direct labor employees is moderately higher than other regions of Mexico. The Asociación de Recursos Humanos de la Industria en Tijuana reports a typical turnover rate of 7% for the city’s maquiladoras in 2018. However, that rate can rise to 9% near the end of the year when many workers leave to spend the Christmas season with their families, confident there will be work available after the holiday.

Yet that shouldn’t prevent companies from benefiting from the city’s easy access to nearby markets, experienced manufacturing workers and low costs. With advanced planning on attrition management, companies stand a lot to gain from investing in Tijuana-based operations.

Benefits to business in Tijuana

Tijuana, located in the state of Baja California, sits only an hour’s drive from San Diego. This proximity makes it a prime manufacturing destination and one of the busiest crossings between Mexico and the United States. The city also boasts major airports, seaports, highways and railways, which together leads to cost-effective logistics and distribution channels for U.S.-based manufacturers.

Foreign investors have seen the advantage of this location for decades. The maquiladora industry took hold in the 1980s. By the mid-1990s, high-tech manufacturing companies had begun pouring into Tijuana. Today, the city is home to leaders in electronics, aerospace, automotive and medical device manufacturing, its strongest industry. This strong network fuels supply chain benefits and employs 26% of the active workforce in Tijuana.

Because manufacturing has such a presence in the city, Tetakawi researchers find that employers will see it is easier to hire technically experienced staff in Tijuana than in other regions of Mexico. Although the country’s lack of formal trade certification programs can make it difficult to easily identify qualified technical staff, many direct labor employees in the area will have learned some manufacturing skills in prior employment. In addition, approximately 59% of the local employees interviewed for the field study reported current employment in a foreign owned Maquiladora.

How to connect with employees

The Tijuana workforce has an average age of 30, making workers nearly eight years younger than the average U.S. employment age. So perhaps it’s no surprise that these potential employees are seeking work largely through online channels.

Field study interviewees cited social networks as their preferred method of finding new employment, with Facebook leading the way. Internet sites such as Indeed.com were another common source of employment information. More traditional newspaper advertisements closely followed as a popular source, as well as job fairs, which many companies in the area use to establish their brand.

If you’re looking to gain an edge in recruitment, employees will tell you their leading requirement is about pay. Of those workers interviewed, 41.6% reported they have changed jobs for better pay. While pay in the area is significantly more cost-effective than wages paid in the U.S., 58% of the working population in Tijuana earns at least three times the minimum wage of $88.36 Pesos per day. The local direct labor workforce, on average, earns wages at 2.4 times the minimum wage.

While pay is clearly important to employees, wage rates also can help companies determine where to locate. Lower income residential zones are concentrated on the periphery of the city, where most major industrial parks locate. This site selection can help employers recruit an eager workforce.

There is another major key to reducing your turnover: a great benefits package. Tetakawi’s field research found that 88% of Tijuana-based employees receive at least some company paid benefits above those mandated by law.

Effective use of benefits is an important way companies attract and retain employees in Mexico. Companies can maximize the power of their benefits offerings when they focus on those that provide high value for both employer and employee. Examples might include transportation, food coupons, and bonuses that reward attendance or performance.

It is also important to recognize that employees prefer those benefits from which they can see immediate financial value, rather than longer term benefits such as life insurance. An added bonus to bonuses: they can motivate employees without increasing an employer’s severance liability or permanent compensation costs.

While Tijuana-based operations may see competition for manufacturing employees, companies can expect to find a sizeable pool of available candidates at any given time. Employers willing to provide a positive working environment and eager to support employees with competitive pay and benefits will find that they can benefit greatly from Tijuana’s experienced workforce and excellent distribution network. 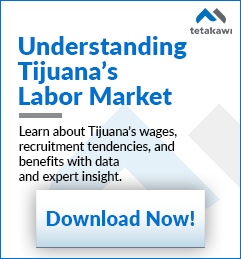 Start your journey into Tijuana today!

Wether you are thinking about expanding into Tijuana or already there, this labor report will help you create and refine your recruiting, compensation and retention strategies.