For years low-cost assembly and manufacturing have taken place in developing countries by firms based in the industrialized world. Otherwise known as outsourcing, the industrial revolution was the first-time businesses started to use outside resources for jobs such as architecture, engineering, and even insurance as a way to save costs. By the 1970s, outsourcing manufacturing came full circle as we saw the production of clothing, shoes, toys, and electronics happening abroad, resulting in drastic changes within the structure of modern industries. Today everything from gadgets to automobiles is outsourced to low-cost countries (LCCs) so goods can remain affordable.

What companies realized then and today is that to remain competitive, they must opt for lower labor costs, which explains why “internal” activities were and are performed outside a country and, at times, by third parties. Additional reasons for utilizing manufacturing resources in developing countries include but are not limited to ease of logistics, decreased production rates, lower wages, and increased cash flow; we will explain more here. However, first, we wish to emphasize how although countries of Asia have often been considered the obvious choice to transfer the manufacturing of worldly goods, looking forward to 2020, the list of the top-producing LCCs now includes Mexico.

Why the change? The trade history between the US and China versus that of the US and Mexico is extreme. For instance, US trade with Mexico has significantly improved since the United States-Mexico-China Agreement (USMCA), which follows the 1994 North American Free Trade Agreement (NAFTA), and allows manufacturers in Mexico to import and export goods to and from the U.S. tariff-free under certain conditions. The US-China trade war, on the other hand, places tariffs on US$250 billion of Chinese imports and some experts predict an increased number of production lines exiting China in 2020 while others argue Chinese companies exporting out of Mexico would fare better since they wouldn’t be paying the 25 percent US imposed tariff.

Not surprisingly, companies procure in low-cost countries because of inexpensive labor.  The figure below shows the average manufacturing wage in Mexico, and China continues to converge over time. Due to yearly increases and a growing limitation of access to skilled workers in coastal areas within China, Mexico is proving to be wage competitive, and its competitiveness is making it a more attractive manufacturing locale for international companies. 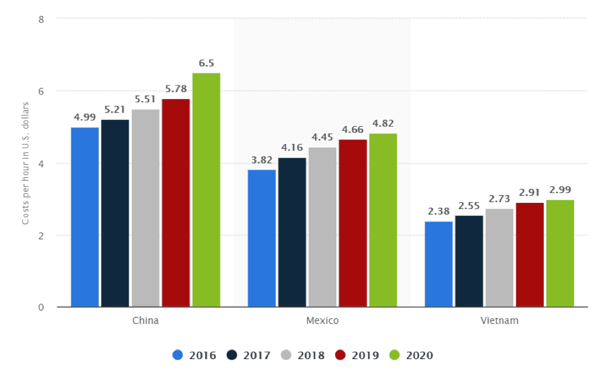 Manufacturing in Mexico – The Proximity Equation

It’s not just wages that make Mexico an ideal location for outsourcing manufacturing. Mexico offers proximity to the United States, while countries such as China are halfway around the world. A flight from China to New York City (NYC), for example, takes more than 13 hours. A non-stop flight from Mexico can take as little as five hours. Shipping times are also significantly less between Mexico and the U.S. than China and the United States. Reduced transit times also equal less costly transport because if quality issues with the product occur, it becomes more affordable and efficient to send products back to Mexico for reprocessing, especially since quality issues arising from China are more problematic in terms of costs.

In addition to proximity, the protection of intellectual property (IP) by a nation’s legal infrastructure is a high priority for international companies as it ensures product security and R&D investment protection. You can read more about Understanding Mexico’s Evolving Intellectual Property Laws here.  Alternatively, China is known for its counterfeit industry and according to the Organisation for Economic Cooperation and Development (OECD), it’s where most fake goods originate and the Office of the United States Trade Representative (USTR) has China on their Priority Watch List. While the US government acknowledges that China has reformed IP laws, there remain significant issues.

Finally, qualified workers in Mexico are plentiful. Although China also has a significant pool of skilled workers, low birth rates suggest diminishing access. Plus, when it comes to safety, Mexico’s government has developed responsible employment practices and stringent child labor laws which helps slow the flow of illegal immigrants to the U.S. Chinese government employee safety practices, we know, are not as developed as those implemented in Mexico, and child labor laws may not be as heavily restricted or enforced as they are in Mexico.

To summarize, today’s manufacturing firms are choosing Mexico over China as an LCC for manufacturing due to wage convergences, supply chain and transportation costs differentials, access to workers and protection by a robust legal infrastructure  Here at Tetawaki, we know many companies that started their low-cost operations in China are favoring Mexico as way to cost-effectively deliver goods to market today and into the future and can help you get there. Want to know more about establishing a manufacturing presence in Mexico? Contact us today!