Mexico’s economy is free-market in its structure.  It is the trillion-dollar range in size. It contains a blend of contemporary and obsolete industry and agriculture, fisheries and farming, but it’s increasingly dominated by the private sector and receiving large influxes of foreign direct investment.

Mexico has undergone weighty and positive economic changes since the mid-1990s. It has endured swift and remarkable improvements in building a modern, expanded economy, developing infrastructure, and confronting poverty. In 1983, Mexico’s economy was still protectionist in nature. The government was openly critical of multinational economic cooperation. Today the country benefits from a more open economic and political system that is highly integrated with the world economy. The new president, Enrique Peño Nieto, has a goal to reach a level of 6% economic growth.

Although the economic crisis hit Mexico hard in 2009, an IMF report stated that Mexico rebounded strongly from the global crisis. The report attested to its strong fundamentals and skillful policy management. The macroeconomic landscape in Mexico appears increasingly desirable; foreign reserves are up, trade with the U.S. is thriving, and Mexico’s inflation rate is one of the lowest in the region.

The media reflection on the drug war has, for the time being, diverted investors' awareness from the superior economic position that Mexico finds itself in today. Once the drug war subsides, there will be a greater recognition of Mexico’s manufacturing and economic potential.

Mexico's economy could be one of the most appealing nascent markets in the world. It has become a redoubtable exporting power—exports were the source of 2% of the GDP in the 1980s. They now account for twenty-four percent. Whereas Mexican exports were almost entirely comprised of oil exports, today the country exports automotives, aerospace components, appliances, medical devices and host of other high value consumer and industrial items. The percentage of exports that the U.S. sources from Mexico is over twelve. 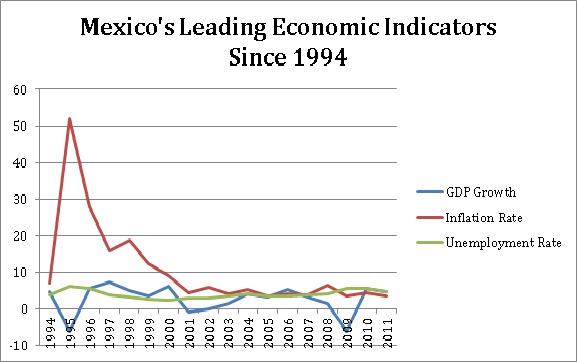 The U.S. and Mexico share strong economic bonds that have been concretized by the NAFTA, which has been in effect since 1994. Mexico’s economy depends significantly upon the U.S. as an export market. Exports accounted for 32% of Mexico’s GDP in 2010 and over 80% of Mexico’s exports are headed to the U.S.

Currently, the U.S. is in a negative economic state when compared Mexico. The security of Mexico’s economy has allowed it to surpass the U.S. in many macroeconomic areas. Mr. Richard Fisher, President of the Federal Reserve Bank of Dallas, recently told the Mexican Stock Exchange that the U.S. Congress and its presidential candidates should “take a chapter from Mexico’s book on implementing real fiscal reform. They might well benefit by broadening their perspective on Mexico; from focusing solely on illegal immigration and drug and gun trafficking…”

Mexico has lower levels of debt and lower fiscal deficit than the U.S. Mexico has also administered a balanced budget whereas debt has risen to perilous levels. Mexico’s national debt is about 27% of its GDP, while the U.S.’s debt-to-GDP ratio was 99% in 2011 and is expected to hit 116 percent in 2012. In 2010, Mexico’s economy experienced a higher than expected growth rate of 5.0% whereas the U.S. economy experienced a growth rate of 2.8%. 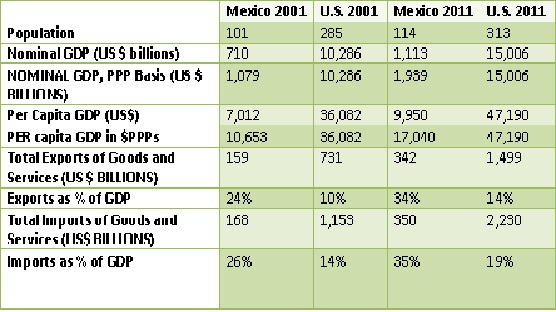 o Reform the public pension by transforming it to an individual account system with a minimum guaranteed pension;

• Endorse the rule of law

o Amplify the competitiveness and effectiveness of the energy sector;

o Fortify the financial system to be an efficient liaison for national savings and feed for investment;

o Sustain small and medium size businesses and assimilate them into the mainstream;