State of The Manufacturing Workforce in Mexico and The U.K.

The rise of manufacturing occupations in 2018 grew 2.5% from 2017, which increased the overall hours worked in the country and maintained a similar GDP growth. Mexico has a multitude of manufacturing regions that provide different workforce specialties. 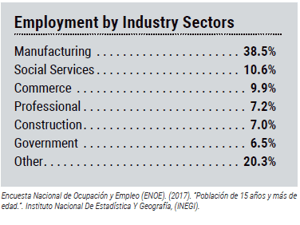 The behemoth that is the manufacturing sector within industry hubs across Mexico boosts interest for a younger generation of workers by providing benefits, growth incentives, and a familiar work environment that has become a staple in the country.


In contrast, the online magazine The Manufacturer, reviewed a recent Barclays report that stated 47% of young people in the U.K. don’t find a job in manufacturing appealing, and only 33% of those surveyed think advanced technological skills can be attained by a manufacturing job. The perception of manufacturing careers in both Mexico and the U.K. are different in regards to career growth and benefits.

The development of Mexico’s workforce has been advancing over the past decade, especially since local governments began to implement training partnerships with manufacturing companies and schools. The country has also dedicated a higher than average expenditure to educational institutions since 2011. The importance of education and industry partnerships have made Mexico’s enrollment of students in public institutions is highest among the rest of Latin America, according to OECD.


The Manufacturer’s review also stated that U.K. manufacturers have attempted to recruit employees through different strategies including apprenticeships, university and secondary education partnerships, and even social media marketing. Many of the U.K. companies stated there was a decent amount of applicants, but a lack of manufacturing skill-set, including STEM education. The Barclays report that was reviewed, stated that manufacturers in the U.K. should invest €6 billion Euro through 2023 to boost manufacturing interest through apprenticeship programs, graduate recruitment and educational institution collaboration.

A collaboration of government and industry initiatives boosts manufacturing career perspectives in Mexico. For example, our 2018 Saltillo labor report reviews Mexico’s education and states, “The current generation of workers is about 3% more likely to graduate high school and 10% more likely to earn a Technical or University degree than the previous generation in Saltillo. Government assistance is available for workplace  training and many companies have taken advantage of this benefit to improve workplace skills.” With government support, generational interest, and skills advancement, Mexico enables longevity to manufacturing careers.


The Barclays’ report stated that 21% of businesses manufacturing in the U.K. are seeing a drop in workforce morale, and extra work for 36% of existing workforce because of new recruits that might lack skills. But, a majority of manufacturing companies (75%) do plan on changing and investing in their recruitment strategy in some way.


Mexico has talent willing to begin careers in the manufacturing sector, along with the infrastructure, supplier network, and logistics needed to maintain a successful operation. Overall, the country’s skills in technical manufacturing are beginning to exceed those in other countries. Contact us today to learn more about how you can begin your Mexican manufacturing operation.