Mexico Free Trade Agreements have pushed the country to become the 12th largest export economy in the world, with USD $472.3 Billion in exports in 2019. Beyond the country's manufacturing advantages, access to free trade provides mutual benefits to partnering countries and companies alike.

What is a Free Trade Agreement?

A free trade agreement (FTA) is an arrangement involving two or more countries to reduce import and export trade barriers between the parties. Agreements may include loosening or eliminating tariffs on goods and services transported across regional lines, and they may consist of environmental and social stipulations based on such products. Free trade agreements can be unilateral, bilateral, or multilateral, and most countries hold more than one.

What are the benefits of Mexico's free trade agreements? 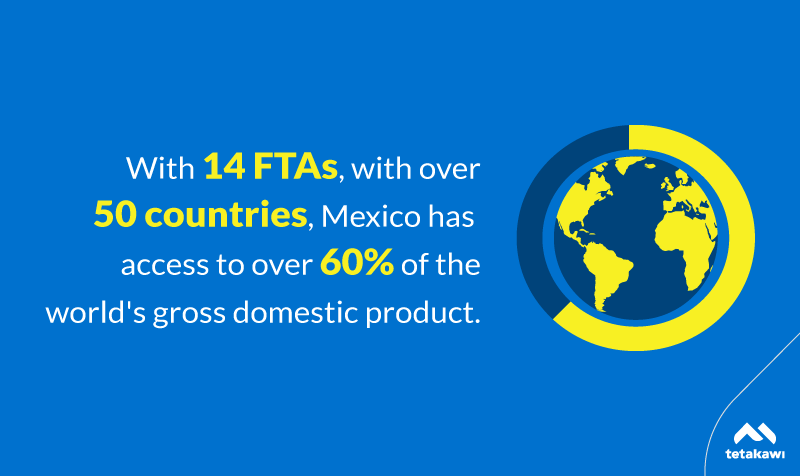 Free trade agreements provide countries access to different markets and encourage global competition. More importantly, FTAs can boost a country's GDP and promote business opportunities and attractive cost incentives for companies looking to establish operations. For companies looking to manufacture in a foreign company like Mexico, free trade agreements offer many benefits. These include reduced barriers to trade and strong cooperation between nations concerning the exchange of goods and services.

With a total of 14 Mexico free trade agreements across more than 50 countries, the country has access to over 60 percent of the world's gross domestic product. By extension, it is no surprise that Mexico's top ten trading partners receive exports under stipulations from at least one of the country's Free Trade Agreements (FTAs), excluding China.

In contrast, uniform tariffs are applied to countries that are not a member of a Free Trade Agreement but still trade – trade between China and the U.S. is a good example. A third-party source sets these tariffs, usually the World Trade Organization (WTO), and are applied on a case by case basis.

Mexico's top free trade agreements are bilateral (two country partnership), and multilateral (three or more country partnership), and include NAFTA, EU, Japan, Pacific Alliance (G3), and Central America. As the trade evolves between nations, renegotiation or withdrawal from specific terms is common. Many of Mexico's top FTAs have had revisions, renegotiation, and withdraws, creating a more robust, more beneficial agreement for all partnering countries. 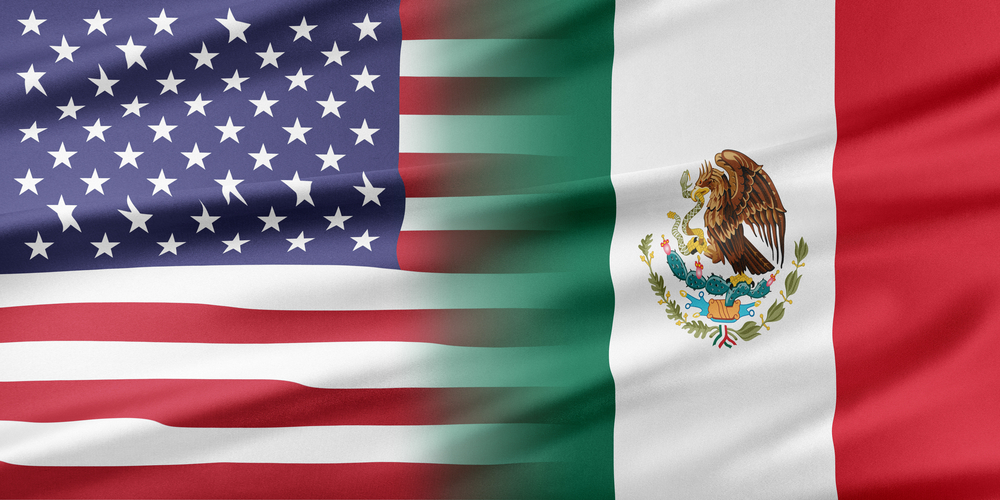 Mexico's proximity to the U.S. and Canada created an extensive North American logistics hub that provides easy access and entry of goods for all three countries interchangeably. The North American Free Trade Agreement (NAFTA) boosts trade between the three countries by eliminating tariffs on products with a 60 percent rule of origin in North America. The top exports from Mexico to the U.S. and Canada are automobiles, auto parts, and electronics. These exports are due to two- and three-way trade where more than half of the materials used in the products originated from a NAFTA country. This form of trading has boosted the GDP rates of all three countries over the past 23 years.

A new version of NAFTA, which is called USMCA (the U.S.– Mexico–Canada Agreement), is scheduled to take effect July 1, 2020. After nearly three years of negotiation, each nation is working towards meeting country-specific requirements to meet the implementation date. This "new NAFTA" makes several notable updates to the former agreement, including:

The EU–Mexico Free Trade Agreement is one of the most comprehensive trade agreements negotiated by the EU. Investors in either region are granted preferential access to goods and services and investment security. Signed in 2000 and implemented in 2001, the first transatlantic FTA for the EU seemed successful as trade grew by 28.9 percent in its first two years. Tariffs on Mexican exports to the EU began with an 82 percent tariff elimination. These tariffs and were scheduled to phase out by 2013.

Mexico exported USD $23 Billion of products and services in 2015. In particular, exports to Germany reached USD $6.83 Billion the same year, making the country Mexico's 4th largest export destination and 2nd largest free trade agreement region. Germany, along with Mexico, was part of the G-20 major economies that pushed for improvements in trade and diplomatic relations.

Modernization of the EU-Mexico Free Trade Agreement began with renegotiation in 2015. As of April 2020, negotiations have concluded with both nations agreeing to revised terms. Under the new EU-Mexico agreement, nearly all trade in goods between Mexico and the EU will be duty-free. Customs procedures will be simpler to help boost exports. The new deal also includes progressive rules on sustainable development, such as a commitment to effectively implementing the Paris Climate Agreement. It is also the first time that the EU agrees with any country in Latin America regarding investment protection.

The Japan–Mexico Free Trade Agreement was Japan's first comprehensive agreement with any country. Signed in 2004, and enforced in 2005, Japan has become Mexico's 5th largest export destination with USD $4.4 Billion in exports ten years later. Commonly known as the Economic Partnership Agreement (EPA), the FTA between Japan and Mexico relieved tariffs on goods and services. It was revised in 2011 to apply lower import tariffs on some agricultural products from Japan and Mexican imports on auto parts and in-jet printer paper. The partnership allowed more Japanese investment in Mexico because of its access to broader markets – the U.S. and Canada.

Colombia, Venezuela, and Mexico make up about 70 percent of the greater Caribbean region. The three countries entered a Free Trade Agreement in 1994 that protects intellectual property rights and public sector investments. Trade restrictions were due to be lowered annually by 10 percent over ten years. Venezuela eventually left the agreement in 2006.

In the years since, Colombia and Mexico have adapted and expanded the agreement, with added provisions related to market access and rules of origin. As Mexico's 7th largest export country, Colombia represents over USD $3 Billion in exports each year.

Eventually, Colombia and Mexico entered into an additional agreement with the countries of Chile and Peru, which was ratified in 2014. Named the Pacific Alliance, the agreement eradicated over 90 percent of tariffs between the nations. It also represents a shared commitment to promoting a better quality of life for their citizens and fostering integration, with a vision of inclusive development.

Mexico's free trade agreement with Central America began with an alliance along the Northern Triangle, with relationships among the nations of El Salvador, Guatemala, and Honduras. In 2011, Mexico, the original Central American countries, and additional nations Costa Rica and Nicaragua, signed an agreement that was officially ratified in 2013. The agreement maintained similar stipulations to NAFTA, which included little to no tariffs on goods and services, and garnered around USD $5 Billion in Mexican exports in 2015.

Mexico offers more Free Trade Agreements (FTAs) than any other country and is a trading partner with more than 50 countries. You can get the full list of Mexico's 14 free trade agreements here. Given this reputation, it is easy to believe that the FTAs make doing business in Mexico duty-free. However, though this robust export platform affords companies many advantages, it requires vigilance as agreements are often modified. To get answers to all of your questions about Mexico's free trade agreements and how they can benefit your company, contact Tetakawi today.